You are here : Home»How To» How to Backup and Restored Contacts on Windows Phone 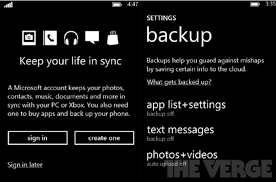 When a phone dies, breaks, is lost or for some other reason is not going to be used by a person anymore, there is one thing that they are most worried about. They are afraid that they have lost the list of contacts that were on the phone forever.

It is common for people to have contact information for hundreds, if not thousands of the people they know stored on their phone. The phone may be the only place that they have this information stored. Times have changed from when people used to keep a personal phone book that had all of the number sin it. Now it is much easier to store them digitally. The problem is that smartphones do not last forever. Many people get new smartphones every 2 years. In many cases the contacts are easy to transfer from one phone to another. As long as the old phone is still operable, it should be possible to transfer the contacts. Unfortunately there are times when this is not so. Phones break and there are some people that switch carriers that have difficulty transferring the information. In that case they need to know how to backup and restore contacts on a windows phone. It is actually not very difficult and will almost guarantee that you never lose your list of contacts.

To start the backup process a person should do so when first setting up the phone. It is typically one of the options that is offered during setup. The device will ask if it wants to backup different things to the SkyDrive. If that is done during the setup, the phone will store the contacts in SkyDrive. This can also be done after the initial setup. By clicking on settings, system and backup, it is possible to have the information saved to the SkyDrive.

Restoring the information from SkyDrive should be done on the initial setup of the phone. There will be a question asked of whether you want to restore any information that has been backed up. During this time a person will need to sign into the same Microsoft account that they had used for the previous Windows mobile device. Once that is done, the information will be downloaded to the new or restored phone.

Thanks to the cloud and Microsoft SkyDrive, there is no need to worry about how to save your contacts and how to get them on your next Windows mobile device. It is a simple process that should be done. The rest will be up to the phone and the cloud. The result is that you will always have an updated contact list and will be able to retrieve many other things in the event that something happens to your Windows mobile device.