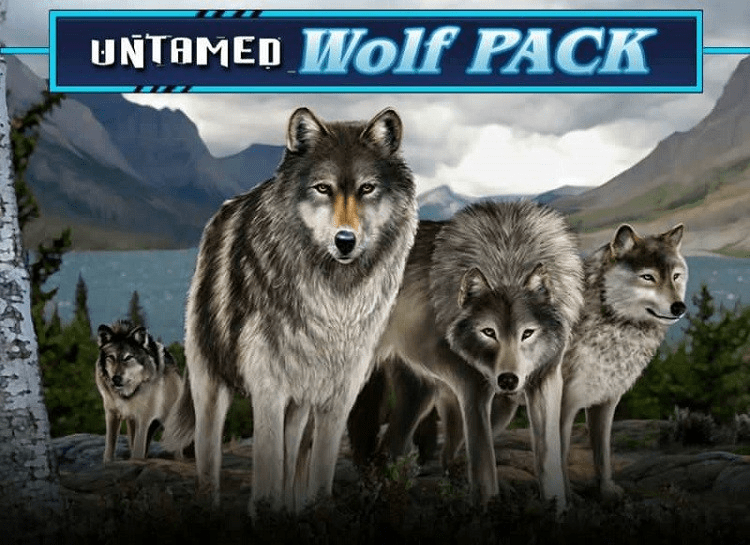 Ever tried taming a wolf? No No but here you can certainly encounter untamed wolf in Microgaming pokies of  5 reel and 243 ways to win machine. There are bonus features that award you free spins on landing of scatter symbols in winning combinations. Also is the wild feature to pay you out and gamble feature to play a type of wheel of fortune game for some more wins.

Untamed Wolf Pack offers up some fierce pokies machine action with loads of winning combinations and some smart bonus features, including a lucky nudge feature as well as free spins. There is also an adrenaline pumping game which gives players the opportunity to boost their winnings by up to 20x. 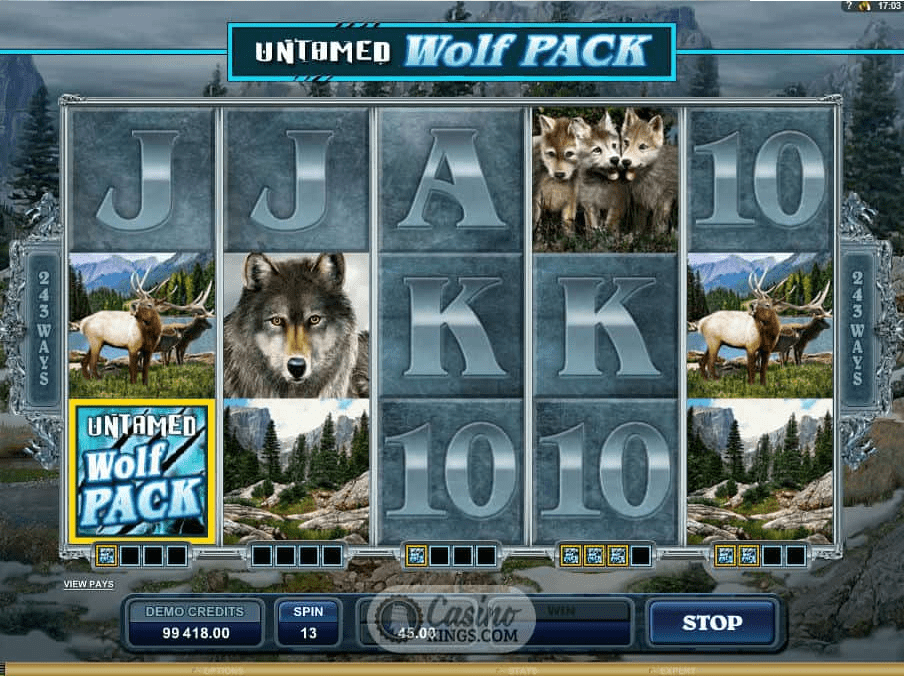 This pokies pokies machine is definitely a good option for those players who want to be in with a chance to win some big bucks. That is because this game offers punters the chance to win up to 180,000 credits.

There are adorable wolf cubs, scenic viewpoints, and a mighty elk. There is also a majestic grey wolf – but instead of fearing this animal’s untamed power, you should welcome the sight of it since it will reward you with the most credits out of all the normal game symbols. 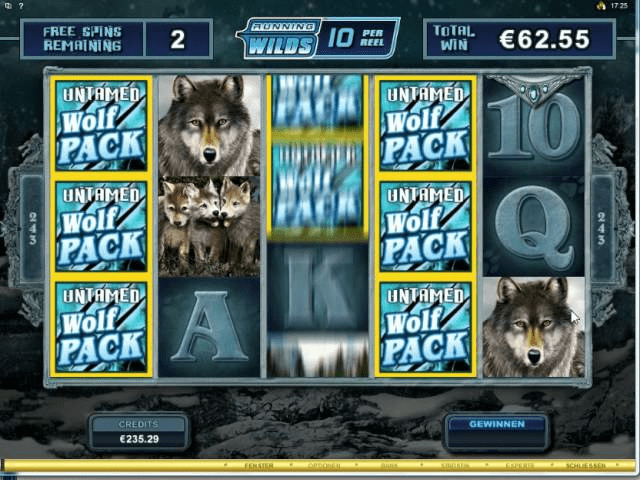 Free spins are awarded to players whenever they collect a certain number of scatter cards or wild cards. When this happens, they will be able to sit back and enjoy the reels spinning freely free of charge for up to 10 turns. A feature called “Running Wilds” will come into play during these free spins. This essentially grows the number of wild symbols per reel with every free spin, resulting in a significantly heightened chance of winning a substantial payout.

There is also the “Collect-a-Wild” feature, which involves expanding wilds. Whenever a player has collected four single wild cards on any one reel over the duration of play, the game will award four spins in which that reel will be filled with wild symbols.

Last, but by no means least, the lucky nudge feature is a randomly activated bonus which will shift a peeking scatter card on to the reels to trigger the free spins feature.

The only thing that a player has to do is choose their coin size from the limited range available (0.01, 0.02, 0.05, 0.10) and then choose how many coins they want to bet. It’s as simple as that. Finally, just click the “Spin” button to get the reels spinning. 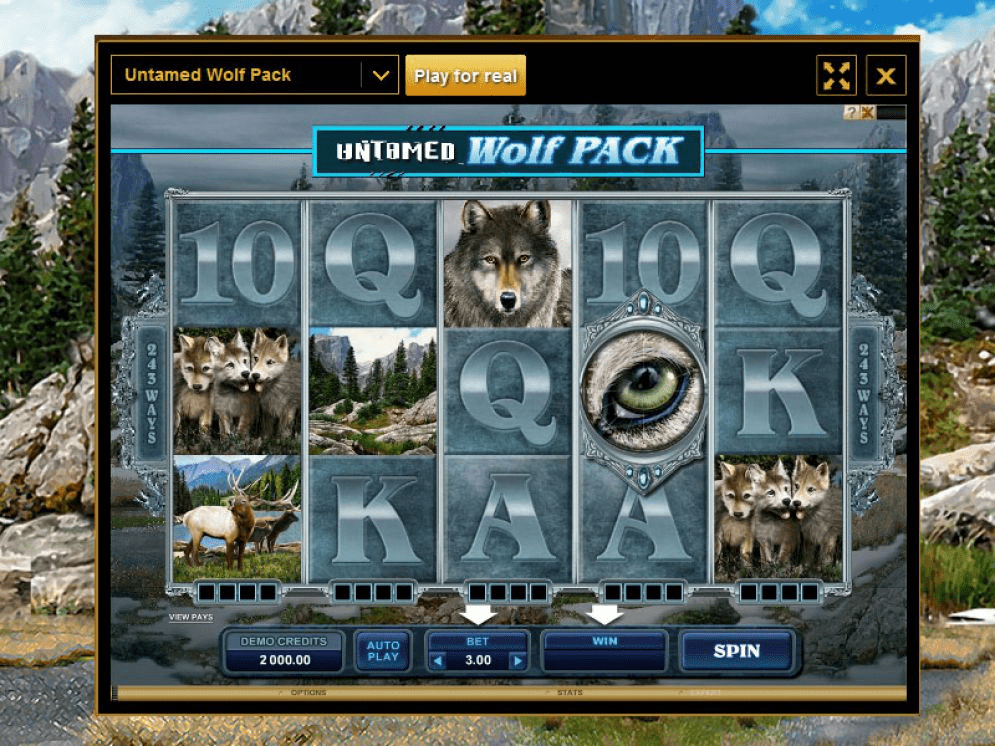 Untamed Wolf Pack also boasts a very convenient autoplay feature, allowing spinners to set up an unlimited stream of consecutive spins. Alternatively, they can choose a custom amount – just in case they want the reels to keep on spinning while they pop to make themselves a cup of tea.

You might just need that cup of tea to calm your nerves for the game’s adrenaline packed gamble feature. This side game can be started after any winning spin, simply by clicking the “gamble” button that will appear above the “spin” button.

If you take the gamble, then the winning amount from the previous spin will be carried over to a new screen which features a radar with a single dial. You will be able to win up to 20x the qualifying win amount by toggling the (-) and (+) buttons below the radar. This will increase or decrease the size of the red zone on the radar. 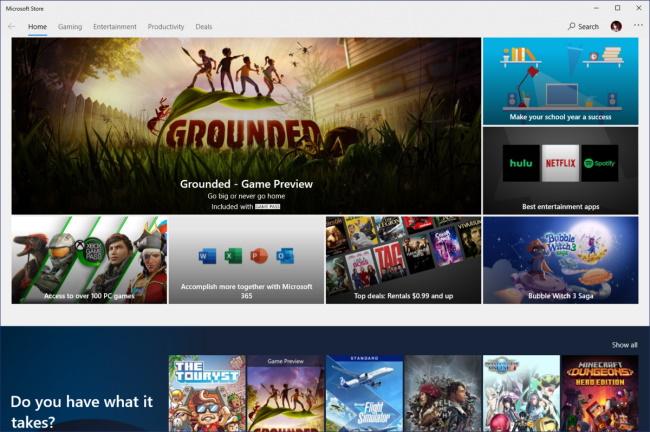