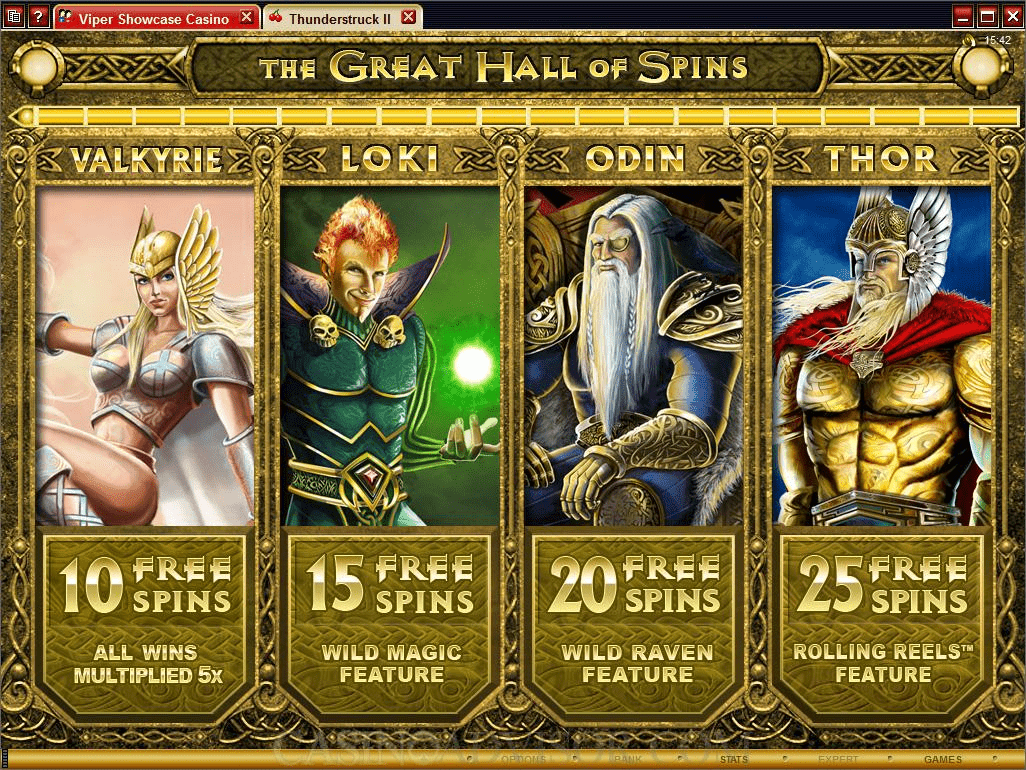 Thunderstruck is the most popular pokies developed by Microgaming  themed on Norse mythology featuring Nordic gods like Valkyrie, Loki, Odin and Thor. You will enjoy the second version of this game too called Thunderstruck II where these Gods are depicted on the reels with castles giving you a fantasy look. Thunderstruck II is designed with a total of 5 reels, 3 rows and a 243 ways to win pay line structure that can be enjoyed with your mobile smartphone and other devices. Playing is more fun with mobile as you go to unlock more bonuses and features to win more.

Thunderstruck II packed with lots of features having four types of free spins, a Wildstorm Feature that can give jackpots as high as 2,430,000 credits and 243 ways to win on each spin. 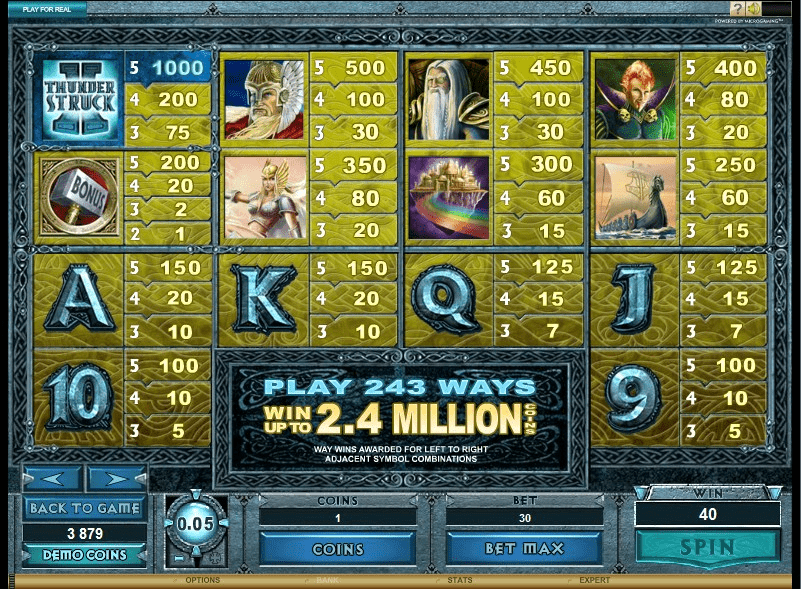 Wild storm Feature: This is a totally random feature than can happen in middle of a spin. The Wild storm features a thunderous Wild storm that will rage on your screen and give you one free spin, with up to five expanding Wild reels. The maximum is 5 but you can also get less, which is more usual, such as 2 or 3 depending how lucky you are.

The Great Hall of Free Spins: If you’re not familiar with the legends of Vikings, then it’s said that if a Viking warrior died a ‘valiant’ or honourable death, that the Valkyries will bring him to Odin’s Great Halls and give him a lifetime of feasting and partyin.  So the more times you enter the hall, the more free spins you can unlock and meet the gods one by one and therefore, more wins to be had.

Valkyries Free Spin Bonus: This is the first step in the free spins, where you can get up to 15 free spins which can be multiplied by 5.

The Loki Free Spin Bonus: This naughty god can unlock 15 free spins for you and can also turn random symbols into wilds to trigger bigger wins.  There’s a lot more to Loke as the game goes along.

Odin Free Spin Bonus: Hit this feature and Odin will trigger 20 free spins, and the twist is that if you one Raven to land on the reels, you will be rewarded with random multipliers of x2 and x3 on winning symbols. If both ravens land on the screen you’ll get x6 multiplier, which is rarer of course but can pay out well and boost your coins when it does.

Thors Free Spin Bonus: You might be familiar with the god of Thunder and here when you get 15 entries into the Hall of Free Spins, the gods will consider you worthy and Thor himself will give you 25 free spins with ‘rolling reels’  which will make winning symbols disappear and then new symbols to take their place for winning pay lines to be formed!  The consecutive wins will increase the multiplier from 2x to 3x, 4x and 5x your win. 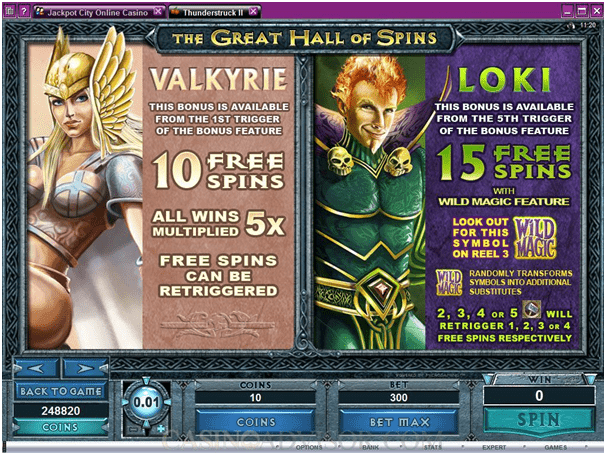 You can play this pokies with minimum bet of 30 credits and a maximum of 300 credits. You can choose from credit levels starting at 1c and going up to 10c. Thunderstruck II logo is wild for all symbols except the scattered Hammers. Getting five wilds on the screen pays 10,000 credits at max bet or 1,000 if you’re playing one credit per line. Get three or more of the scattered Hammer symbols and you gain entry into the Great Hall of Spins where you can choose one of four different features.

At any time during the regular spins Thor can appear and turn between one and five reels wild. Getting one or two can lead to some nice multi-way wins but get three, four or five and you’re looking at some huge pays. All five awards the games highest pay of 2,430,000 credits.