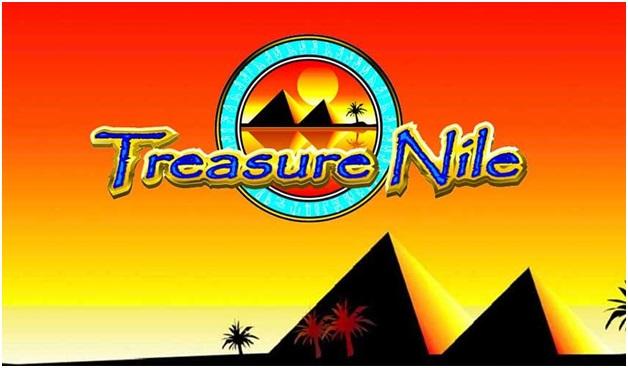 Egypt is a great civilization to explore where Nile is the most fertile of the river. Treasure Nile is a Microgaming progressive 9 line pokies game with a progressive jackpot that starts at $40,000. You can win the progressive by lining up five of the Gold Masks on the ninth pay line with max bet $4.50 in play in this game.

To play Treasure Nile you have to play $4.50 per spin or less if you wish. With the wild and scatter symbols where scatter pays up to 6,000 credits or $3,000 for five of a kind which is the same jackpot as the one for the five Gold Masks on lines 1 to 8. Explore more.

From ancient papyrus inscribed with the Eye of Horus, King Tutankhamun’s famous death mask, a River Nile sailing barge, the King Cobra, Amulets, the jackal-headed god Anubis, Egyptian pillars, The Sphinx with the Pyramids in the background, if it is linked with ancient Egypt, then it is likely on the reels.

Each of the symbols has been beautifully realised too, capturing the essence of this ancient civilisation across the reels. 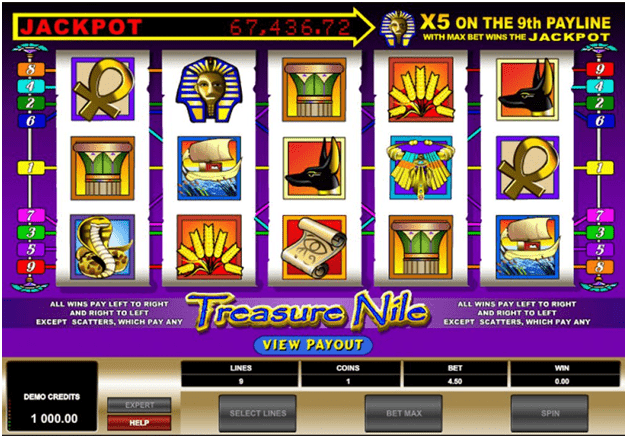 When it comes to features, Treasure Nile doesn’t have a separate bonus game, or any free spins round, however it does boast Wild symbols. These are the Pyramid symbols and they can be used to substitute for any of the other symbols in the game to complete a winning pay line.

The only symbol that a Wild cannot substitute for on the reels is the in game Scatter symbol which is the Golden Scarab beetle. Land three or more scatters anywhere on the reels (they do not have to be on a single pay line) and you can win from 5 times to 50 times your total number of credits stakes on that spin (which is always 4.50). 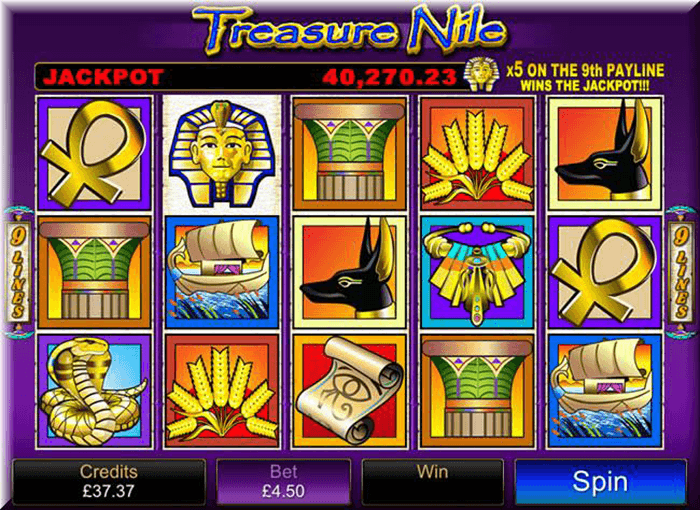 There are two jackpots available in the game. The first is the standard jackpot and this is triggered when you land five of the Tutankhamun Death Mask symbols on any of the first 8 pay lines of the slot. Achieve this and you will trigger a 6,000 coin payout immediately.

However, if you can land the same five Tutankhamun Death Mask symbols on the lucky ninth pay line of the slot (which is the bottom two symbols of reel two, the middle symbol of reel three and the top two symbols on reels four and five) then you will trigger the progressive jackpot win.

It is not unusual for the progressive jackpot on the Treasure Nile pokies to grow upwards of 500,000 credits at times and when it is won, it reverts back to its seeded amount of 40,000 credits.

Treasure Nile may be a little on the expensive side for some progressive slot fans, but there is no doubting that it has instant appeal thanks to its Egyptian theme, great graphics, large standard jackpot and its potentially massive progressive jackpot. 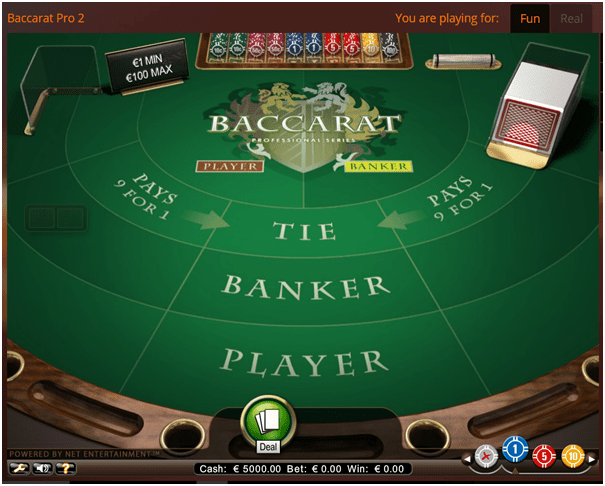 Baccarat Online Rules and How to Play