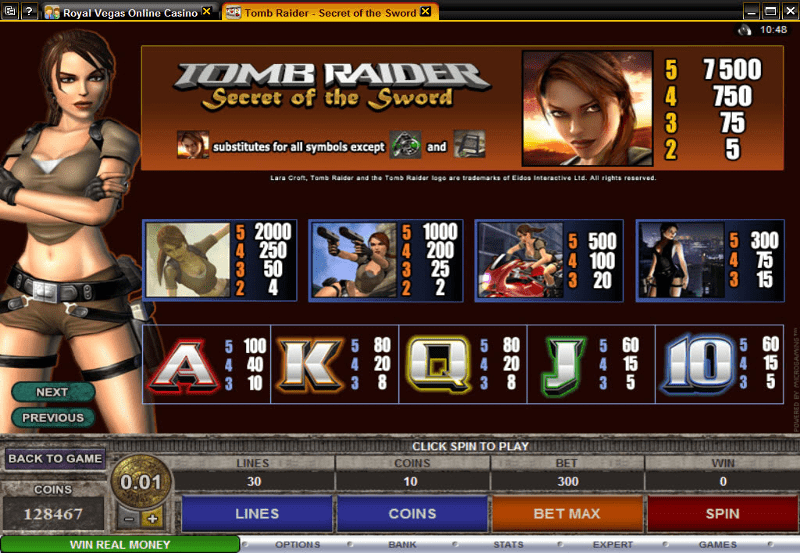 Tomb Raider 2 is the highly successful sequel to the Microgaming Tomb Raider branded online pokies. A five-reel online pokies containing thirty (30)-non-fixed paylines, this Tomb Raider 2 version is as action-packed as it appears. It features more than just the usual Wild and Scatter Symbols and Free-Spins Bonus Game.

Tomb Raider II is pokies has lots of features and a top prize of 375,000 credits.With 30 lines to play at a 30 credit bet the lowest denomination is 30c. You can bet up to 10 credits per line and credit sizes go up to 20c which gives a top bet of $60. 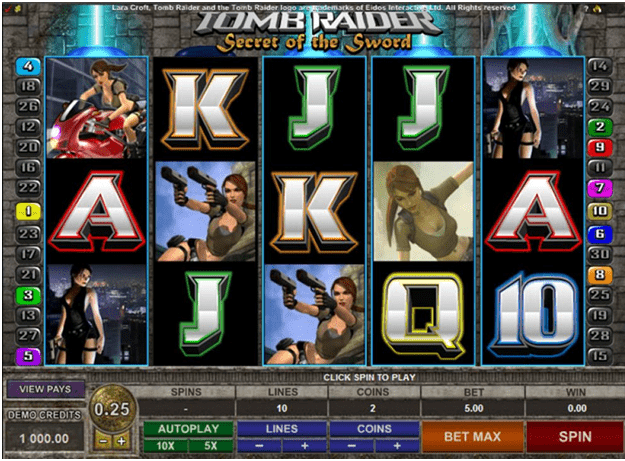 This is another reward-giving round but is randomly activated during the base game. Five (5) free spins will be awarded to a “Super Mode” player. During the free spin motions, Wild Symbols with varying Value Multipliers appear at random, and stays fixated on the same position during the free round. It is possible therefore for a “Super Mode Reel” to have multiple Wild Multiplier Symbols in play, during the bet-free spins.

This free-spin segment is activated by the Passport Symbol, which appears only on the center row of the reels. Each center-row Passport icon that comes into view gradually sets off the “Global Adventure (GA)” Bonus Game. In a continuous base game play, and independent of the Free Spins Bonus Round, the separate appearances of a Passport Symbol in the center row of all five (5) reels, sets off the GA Bonus Game.

The GA bonus feature comprises different virtual key global locations presented as free interactive game choices to the GA player. Rewards in the form of random bonus multipliers, hidden coin treasures, and fragments of the Excalibur Sword with corresponding bonus amounts are available as extra prizes. According to the Tomb Raider 2 game info, up to 135,000 coins are available as extra winnings in a single GA Bonus round. Still, the game could end abruptly, as one of the icons offered as “Click Me” choice is a game-stopper symbol.

If you line up five of the wild Lara Croft symbols you can win 75,000 credits if you’re playing 10 credits per line or 7,500 if you betting 1 credit per line. Three or more of the scattered Artifact symbols gives you 10 free games with Rolling Reels After each cascade the multiplier increases by one with a maximum multiplier of X5. The feature cannot be re-triggered but you can win up to 375,000 credits with the five wilds at the highest multiplier.

At any time during regular play you can win the Super Mode free games which give you 5 free spins with the chance of extra wilds being added to the screen and held for the remaining feature spins.

Tomb Raider II has a secondary bonus feature where you can win up to 450X your total bet or 135,000 credits if you’re playing max bet. The feature is won by collecting Passport symbols in the middle position of all five reels.

There are also some extra hidden bonus too to discover such as double wins, a shootout bonus and a random battle bonus where Lara fights it out with one of her enemies. Exciting Isn’t it! 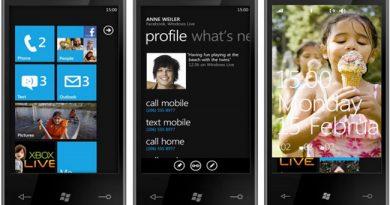 Mega Moolah Online Jackpot, Tips and How to Play